You are here: Home / STELLA / Ever have the urge to call someone a buttface in public? 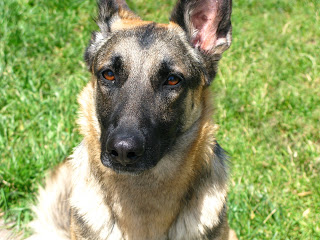 Even though I’ve been busy, I’ve been working to socialize Stella. And slowly, but surely, she is warming up and getting more comfortable with new situations. Anyone who knows dogs has commented on how sweet she is, despite her fear issues.

I talk to neighbors when we go on walks, so she can get used to being around people she doesn’t know. We take both dogs to a German Shepherd playgroup once a month. Stella and I go for walks with my friend M and her dog on an almost weekly basis (which is, admittedly, more about socializing me). And any time I have an excuse to go to the pet store, Stella comes along.

She doesn’t shake anymore when we walk through the automatic doors, and while she avoids getting too close to people, she doesn’t try to fuse herself with my leg anymore when she sees them. She does, however, still bark at other dogs when she’s on her leash. Apparently, this is called leash aggression, and it’s quite common. It’s also an issue she had already when she came to us. The most effective way of dealing with leash aggression is to stop it before it starts, so we’re fighting a little bit of an uphill battle. But we’re fighting it. We’ll get there.

Unfortunately, not everyone understands that Stella is all bark and no bite. She’s sweet and goofy and affectionate. She is a wonderful dog, and it breaks my heart a little when people look at her like she’s a vicious beast just because she’s barking. She’s under control. I’ve got a good grip on her. I correct her. I don’t put her in situations where she could hurt or get hurt (even though I honestly do not believe she’d ever hurt anyone). I am a responsible owner. Right now, my dog barks a few times when she’s on her leash and sees other dogs. Get the eff over it!

We were at Petsmart the other day. Stella caught wind of a big, drooling bulldog and barked at him. She tried to lunge in his direction, but of course, I didn’t let her. She barked a few time from across the wide center aisle. I told her to stop and kept walking with her. Stella stopped barking, and we went on our way to look for a water fountain for the cat (I know, I know, but the cat had a UTI a few weeks ago and wasn’t drinking enough water). As we were walking away, I heard the bulldog owner let out a big disgusted sigh, but I ignored it.

When we got in line at the register, a little girl came up and asked if she could pet my dog. I told her it probably wasn’t a good idea. I think Stella would be fine, but since she’s still getting used to the whole being out in public thing, I didn’t want to push it. I got distracted talking to the little girl, and didn’t notice when Bulldog Lady got in the line next to us. Stella barked at her dog again. I told Stella to stop and she stopped. I made her sit, and she did, and I praised her for paying attention to me.

Bulldog Lady got up to the register and said LOUDLY to the checker, “I don’t understand why people bring dogs like THAT out in public.”

Well, I usually keep my mouth shut and turn the other cheek in situations like that, but I was about to develop my own leash aggression situation. Luckily, I didn’t have to.

The checker said to Bulldog Lady, “Actually, they tell people who rescue dogs to bring them out to get them socialized when they have issues like that.” She turned to me and said, “Is she a rescue, honey?”

I said, “Yeah, we’ve only had her since November.”

The checker kept scanning Bulldog Lady’s items, but ignored her to chat with me. “Good for you!” she said.

We talked about where Stella came from and how she’d had a lot of crate time and not a lot of socialization and she was scared of everything when we got her, but she’s so much better now. The checker finished up with Bulldog Lady, and we watched her storm out in a huff. I really wish I’d gotten the checker’s name, so I could have called later to tell the manager how awesome she was.