I had the chance to tell you a bit about Kate Ledger’s The Dogs’ Book of Romance the other day when I announced the Valentine’s Giveaway (have you entered yet?  Go enter!). But I didn’t get to talk much about Remedies, Kate’s debut novel, so I figured this would be the perfect Book Trailer Friday pick!

REMEDIES is a Self magazine book pick, an Indie Next List Notable Book, an Ingram Premier Pick, a “Community Read” selection of the Twin Cities Jewish Book Fair, and earned a starred review from Publisher’s Weekly, who said: “Ledger’s accomplished debut offers a compelling view of married life through the prism of unacknowledged grief…with rare insight… An impressive portrait of a family in crisis, executed with finesse and assurance.”

“Ledger makes medical science interesting and accessible, but her triumph is the creation of Simon, a deeply flawed and magnetic character… Complex, nuanced and engrossing portrait of a doctor’s life.”

“Esteemed Baltimore doctor Simon Bear becomes convinced he’s discovered a cure for chronic pain, a finding that could become the major medical breakthrough of our time. With reckless zeal and obsessive focus, he begins to recruit patients to test the therapy. As he yearns to prove he’s a good doctor—and to make amends for a missed diagnosis years ago—he is oblivious to the pain he’s causing at home. His wife, Emily, still struggling to move beyond the devastating loss she and Simon suffered fifteen years ago, realizes she hasn’t felt anything for a long time-that is, until a lover from her past reappears and she’s forced to examine her marriage anew.”

And, because Kate is so lovely, she took the time to answer my questions! 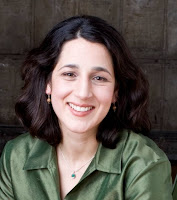 Did you always know you wanted to be a writer, or did you have other aspirations?

I wanted to be a writer ever since Charlotte’s Web was read to me as a kid. Even back then, I liked books that were deep emotional experiences—that would make me gasp, or get teary, or feel like I’d just disappeared into another world and that my own life and well-being was bound up with these fictional characters. I took creative writing classes outside of school every chance I could, even as a seventh grader. For a few summers, I had internships working for newspapers, and even tried on other career ideas—at one point I thought being an immigration lawyer sounded like a really good aspiration—but I kept coming back to fiction. That led me to get a master’s degree in creative writing. And even after I started working at a job as a magazine writer, I was still bent on writing short stories and ultimately a novel.

Do you have any writing rituals, or specific things you do to motivate you while you’re working on a manuscript?


Rituals are great! They can be the tow-rope that guides you right back from the real world into your fictional world. I like mornings better than any time of day, coffee better than any beverage, and the computer better than any other writing tool. Those three things help me get started. I can work in noise—there’s a jackhammer on the street outside my window today—but I don’t like hearing music with lyrics while I’m writing, and can’t work near loud-talkers in coffee shops. I have a quirky belief that the brain wants to problem-solve, consciously and subconsciously, at the same time, all the time. So even when I think a sentence reads well, if I mistype or misspell a word, I believe my brain made the mistake intentionally and is telling me to go back and take a second look at what I’ve typed.

I love the concepts of pain and feeling you work with in Remedies. What inspired this story and these characters?

Remedies is the story of a troubled family, but the novel was originally inspired by some of the non-fiction magazine writing I’ve done. For years, I’ve worked as a freelance writer, specializing in health and medicine. As I was writing articles on various topics, I was meeting and interviewing doctors and researchers who’d come up with amazing new treatments for patients. What really blew me away was that some of those treatments ran counter to established medical thinking, even though patients seemed to find them helpful. I started to wonder, as I was thinking about fictional characters—what kind of person would come up with a miracle cure? What would he be like? What traits would he have? And I started to write a book about Simon Bear, a well-respected doctor who believes he’s stumbled across a cure for pain.


It seemed like a fascinating topic—a guy who’s discovered something so incredible it may change people’s lives. But as I was writing, I kept wondering: why. Why would he believe he was right? As I thought more about Simon, I began to think that maybe Simon’s zealous desire to treat his patients’ pain came from a reluctance to deal with his own emotional pain. At that point, in my own life, I’d become a mom, and I’d come to regard the world in a totally new way. As I was thinking about emotional pain, I began to think about Simon’s family life, and the things that were most precious to me and closest to my heart. The source of his pain came into focus: Simon and his wife, Emily, lost a child years earlier, but never let themselves grieve. Instead of dealing with their pain, they’ve tried to move ahead with their lives. Simon still blames himself for not having made the diagnosis that might have saved their child’s life, and even years later, he’s still trying to make amends. The story about Simon and Emily’s complicated marriage and their journey to heal grew from there.

As a debut author, what’s surprised you the most about the publishing process?


It took me a bunch of years to write Remedies, so it was kind of a shock to transition from a very isolated writing experience to the experience of giving readings and talking about the book with people. The very best part of the experience has been meeting book groups, people who really care about literature and who want to talk about what they experienced as they were reading. I’ve been visiting in person with as many book groups as I can, and like many other authors, am meeting with groups by Skype and speakerphone. Remedies is told from two sides of a marriage, and it’s great to hear people analyze the characters and the nuances of the relationship. I really learn a lot, too, from people who share their own stories.

What are you reading right now?


I’m reading Rebecca Rasmussen’s soon-to-be published debut novel The Bird Sisters and Caroline Leavitt’s Pictures of You, which was just published recently. I’m also working on a new novel, and I’m reading specifically for that. The next book also has medical themes—and I’m reading several books about the lives of surgeons.

Thank you so much, Kate!