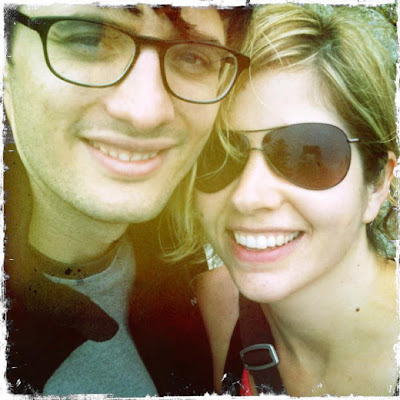 1. What did you do in 2011 that you’d never done before?
I went rock climbing! On actual rock! We stopped in Asheville on the way to Florida this spring, and had the most patient guide (Ron Funderburke at Fox Mountain Guides). I got the shakes and was going to just hang back and watch while J climbed, but Ron helped me get past my fear and do some climbing. It was a great experience.

2. Did you keep your new year’s resolutions, and will you make more for next year?
Last year, spurred by the somewhat horrific realization that between Thanksgiving and Christmas I had eaten most of an enormous bag of marshmallows from a warehouse store, I resolved to eat fewer marshmallows. And I did! I only ate ten all year (I kept track on the white board in the kitchen). This year, I resolve to eat MORE marshmallows than I did in 2010. Like eleven or twelve. You know, just to shake things up.

3. Did anyone close to you give birth?
Yes! There are some new awesome little people in the world! Love it!

4. Did anyone close to you die?
J’s grandpa passed away. He used to write us the best letters, and I still catch myself thinking of things we should put in the next note to Grandpa.

5. What countries did you visit?
Just this one. But I went to Texas for the first time. It doesn’t count, obviously, but it’s something new.

6. What would you like to have in 2012 that you lacked in 2011?
I’m still striving for work/life balance. But I used to work too much at a job I hated, so working too much on my writing feels like a luxury (on the good days, I might have a different answer for you on the bad ones).

7. What dates from 2011 will remain etched upon your memory, and why?
I’m still crap at remembering dates. But we spent a week in Florida in April with J’s siblings, making sandcastles in the sun with our niece and nephew. And I got to lounge on a beach chair and chat with my sister-in-law in person (instead of clocking our gazillion hours a week of phone time). It was absolute bliss.

We also took a last minute trip to Maine in the fall. Acadia is gorgeous!

8. What was your biggest achievement of the year?
Over the summer, I finished what is probably the second to last draft of a personal project I’ve been working on for years. I pushed past the limits of my comfort zone in a major way, and I feel like a stronger person because I did.

9. What was your biggest failure?
I’ve focused on writing so much this year that I haven’t had as much time as I’d like for the people I love. After spending so much time traveling and seeing old friends in 2010, 2011 felt a little sparse.

10. Did you suffer illness or injury?
I had a breast cancer scare. The biopsy results came back clear, it was benign. The surgeon I talked with in follow-up told me that it was an imaging issue – they couldn’t see for sure that there wasn’t something to be concerned about, so the biopsy was just a precaution. The wait for the results shook me up in a major way and I have the ultimate respect and compassion for people who go through that whole process and get different news.

I wasn’t going to talk about it here, because, hey, my boobs are private, but when it happened, I found a lot of comfort from people who shared that they’d gone through something similar, and I wasn’t alone. And I’m going to preach at you! Go to your annual doctors’ appointments! Check your boobs! (Follow Lisa on Twitter, she’ll nag you nicely).

Oh, and then I had that whole fun with Vitamin D thing. But otherwise, I’ve been pretty healthy (knock wood).

11. What was the best thing you bought?
2011 is the year I discovered moose antlers as dog chews. Best dog distraction ever. And since antlers are shed naturally, they’re cruelty free.

12. Whose behavior merited celebration?
My sister-in-law. You know that whole biopsy thing? I couldn’t have gotten through it without her. In general, I’m not sure what I’d do without her. She’s brilliant and kind, super practical, and the funniest person I’ve ever met. My life is so much brighter because I get to be her friend. I am eternally grateful that J’s big bro has such amazing taste in women.

13. Whose behavior made you appalled and depressed?
See #23

14. Where did most of your money go?
I just did our year end expenses and realized that as self-employed folks, last year we paid more for health insurance than we did for our mortgage. Yeah. But, I’m thankful that we have health insurance.

16. What song will always remind you of 2011?
Evan Dando’s cover of Frying Pan. It got stuck in my head and I. COULD. NOT. STOP. SINGING. IT. Under my breath. At the top of my lungs. In the shower. In the car. All the time. I think J was ready to leave me, just to get away from hearing “I looked in a frying pan, I seen a song. I looked at a dying man, he sang along,” over and over and over again. And really, I wouldn’t have blamed him.

17. Compared to this time last year, are you:

b) thinner or fatter?
Not much different, but I need to workout a little more.

18. What do you wish you’d done more of?
Hanging out with people I love.

19. What do you wish you’d done less of?
I just wish I had more time. I don’t want to work less, but I do want to play more.

20. How did you spend Christmas?
Hanging out with J, working a little, eating good food. Somehow J escaped the annual viewing of Christmas Vacation. Hmm….
21. Did you fall in love in 2011?
I am continually in love with J. I’m so proud of him, he’s an amazing friend and husband, and spending my life with him is the greatest gift I could ever ask for.
22. What was your favorite TV program?
Oh, I am a glutton for punishment when it comes to cancelled TV shows. I loved Terriers so much that I watched it twice. Donal Logue (who was in one of my favorite movies ever) is awesome, Michael Raymond-James is awesome, the writing is fantastic, and I adore the look and feel of it (and the theme song). It’s smart and funny and full of heart and I really wish there were more seasons.

23. Do you hate anyone now that you didn’t hate this time last year?
Dr. Seuss said, “Be who you are and say what you feel, because those who mind don’t matter and those who matter don’t mind.” Last year I got to the point where I was just too damn busy to waste my time on anyone who doesn’t matter. There are too many people who mean the world to me and I’d rather spend that energy celebrating them.

24. What was the best book you read?
I had the good fortune of swapping projects with Rainbow Rowell this summer. Not only did she give me incredible feedback on my work (Rainbow = storytelling genius), but I got to read Eleanor & Park, which is now one of my favorite books of all time.

I’d fallen into the bad habit of reading like a writer, but Eleanor & Park made me read like a reader again. I was like a kid reading under the covers with my flashlight. It’s a brilliant love story. I want to hug those beautiful, beautiful characters, and Rainbow for creating them. I feel like she’s has done the world a favor by writing Eleanor & Park, because we need these characters in our literary history so we can think about them fondly, wonder what they’re doing, and feel understood.  I can’t wait to read it again when it comes out.

25. What was your greatest musical discovery?
I feel like my year has been split in two since I’ve worked on two different projects, with two different playlists.

I’m still completely in awe of Chris Pureka (and we got to see her play in Syracuse in November – incredible). How I Learned to See in the Dark is a stunning album, and you need to listen to it.

With my new project, I cannot get enough of Evan Dando. It’s a Shame About Ray has been one of my favorite albums since high school, but I’d never paid much attention otherwise. The song All My Life found its way into my playlist, and it seems to zap me right into my new main character’s head. Right now I’m all Dando all the time, and so thankful that The Lemonheads made like eleventy-gazillion albums.

26. What did you want and get?
A new book deal. And both the dogs I sponsored at Wooftown Rescue were adopted.

27. What did you want and not get?
My new dream is to have a home office in an Airstream Bambi. But I don’t know how practical that is. . .

28. What was your favorite film of this year?
I watch TV shows more than movies, because I like seeing characters develop over long story lines. I did watch The Vicious Kind this year, and it really stuck with me. I’m not entirely sure how I felt about it, but I’m still thinking about those characters.

30. What one thing would have made your year immeasurably more satisfying?
Getting to see my far-away friends much more often. This was my answer from last year, but it holds true again.

31. How would you describe your personal fashion concept in 2011?
The year I found jeans that fit my butt.

32. What kept you sane?
Exercise. Television. I have a hard time reading at certain stages in my writing, which is painful, because reading is my number one escape. So in the first few drafts of a book, TV saves me when I need a break. Also, knitting. I am all about the knitting lately.
33. Which celebrity/public figure did you fancy the most?
I am amazed by Bryan Cranston. J and I watched Breaking Bad, and then went back and watched a whole bunch of Malcolm in the Middle episodes. Aside from the fact that Mr. Cranston spends an inordinate amount of time in nothing but tighty whities on both shows, there’s hardly any evidence that he’s the same person. His range as an actor is fascinating.

34. What political issue stirred you the most?
I am incredibly proud to be from New York this year.

36. Who was the best new person you met?
Libby Cook from Mostly Shepherds was inspiring and so so kind.

I love the idea that the stuff we go through gives us strength and sensitivity that we wouldn’t have if things were easier. What doesn’t kill us, gives us superpowers.

38. Quote a song lyric that sums up your year.
“These are precious times, you and I, we walk the line.”