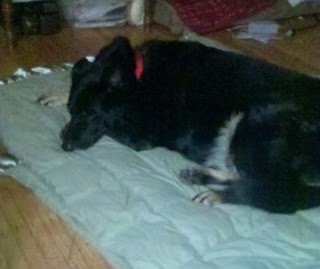 I saw a posting about Junior on a friend’s Facebook page this morning.  This could so easily be a picture of Argo, and it’s breaking my heart.  Stella would have a fit if I brought another dog home, and it wouldn’t be good for anyone involved.  But I wanted to at least help get the word out on Junior, because he needs a home very very fast.
Here’s a little bit about Junior:

“11 year old German Shepherd named Junior. Junior is neutered and was surrendered to us because the owner was moving to a place where pets weren’t allowed. This boy is sweet and was being web fostered because he was very stressed here in the shelter. He has some old dog issues like arthritis and a few fatty tumors. The staff member who had him in foster noticed he was drinking a lot and urinating a lot. Urinalysis revealed possible kidney problems. A local vet donated bloodwork and there is the possibility or diabetes or cushings disease. He needs further diagnostics at this point. A decision was made to euthanize Junior, but because the staff have grown fond of him, they asked me to look for rescue first. He is fine around other dogs and cats. He is currently in the house we own next door with the interns, and they are reporting that he is having some anxiety when left alone. He apparently chewed a door one day and has since been crated, although he is anxious in his crate (but does not try to break out). Junior is ready to go.”

If you’re interested in adopting or fostering Junior, send me an e-mail at info at allielarkinwrites dot com, and I’ll put you in touch with my friend.