You are here: Home / Neil is awesome / Item # six million and ninety-two on the Why Neil is Awesome list 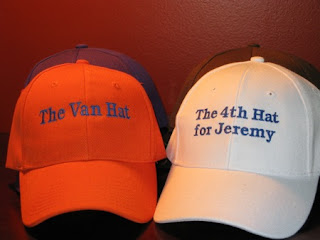 When I talked to Neil on the phone last weekend he hinted that I should keep an eye out for something in the mail.

I assumed it was a cartoon. Neil draws the most amazing cartoons (that’s item # six million and seventy-four on the list). It wasn’t.

On Monday, a small white box arrived. It contained four hats and a letter. The first three hats say “The (Character Name Here)

In the letter, Neil says that while I’ve been focusing on Van, now I’ll be juggling support for the book with moving forward with my next projects.

“What should go on today’s list of tasks? What are your responsibilities for the next few days or weeks? What role should you be playing? This is why, in a gesture of congratulations for finishing STAY, I present to you three hats for three characters . . . It is my hope that, when it’s time to wear a different hat, you’ll, well, wear a different hat.”

I left out a bunch of good parts of the letter that are specific to my characters and I’ve blocked out the names of the other two characters in the picture above, because, well, things are subject to change at any time, and I’m not ready for character 2 and character 3 to make their appearance yet, but I am excited about them and can’t wait to tell you more when the time is right.

Neil then writes to the hubs, telling him “I’ve admired your support of Al, and feel that such efforts deserve a hat as well. This is why I present the fourth hat to you.”

And then there is the P.S. “Please note that I’m aware that these are some ugly-ass hats. I’m hoping it’s the thought that counts and shit.”

Don’t you wish you had a Neil? If everyone had a Neil, the world would be a better place, which, by the way, is item # six million and ninety-three on the list.

Oh, and do me a favor – go stick a finger in a nose for Neil. He’d really appreciate it.