Okay, so you know how yesterday, thanks to the crazy wind I basically mooned the mail lady and got hit in the head with a door?

Well, today Mr. Weather tricked me into spending four hours in the car just to grab a cup of coffee at the exit 42 Wilson Farms gas station off I-90.  I was supposed to go to Ithaca to have lunch with my friend, Marty.  I haven’t seen him in ages, and he was so sweet to plan out a wonderful and gluten-free lunch for us (he’s the most amazing cook I know, by the way).

It was going to be so great to see him and catch up.  I decided to leave early, so I could bum around town for an hour or so before lunch and take a few pictures to post for you, so if you’ve never been to Ithaca, you’d be able to see that Ithaca is Gorges.

The weather report didn’t look great when I got up this morning, but it promised a high of 52 degrees, rain, and then snow showers with temperatures dropping into the upper 20s tonight.  No biggie, right?  I’ve lived in Rochester for almost eleven years, and I spent two years in Ithaca in my late teens.  I qualify as a Western New Yorker now.  I’m intrepid.  The Crapmobile doesn’t always start, but it does have four wheel drive.  I had Peter Mulvey in the CD player and snacks on the passenger seat.  I wasn’t going to let a little rain and sleet keep me from seeing my friend.

I stopped at Wegmans on my way out of town, and when I got back to the car, it was snowing, and it certainly wasn’t 52 degrees.  By the time I got to I-90, it was REALLY snowing.  But, hey, people drive in snow all the time.  And I drive like a little old lady anyway.  People are nicer about that when there’s snow on the ground.

By exit 43, the roads were clearer, and it was more rain than snow.

I got off at exit 42 thinking, That wasn’t so bad, and looking forward to the twisty, picturesque drive through the Finger Lakes.  I decided to stop at the gas station to fuel up and grab some coffee, and when I stopped, I checked my e-mail.  There was a message from Marty saying that Ithaca was having bad flooding and they’d started closing roads.  When I gave him a call, he said, “It’s not that the roads are bad . . . it’s that they aren’t there.”

I may be intrepid, and the Crapmobile may have four wheel drive, but it is not an amphibious vehicle.  So, me and my gas station coffee turned around and headed back to Rochester, just in time to hear Peter Mulvey sing “We got the news, Ithaca got snow . . . It was just that kind of day,” because, you know, I needed someone to rub it in.

Instead of pictures of gorges and The Commons, you get this: 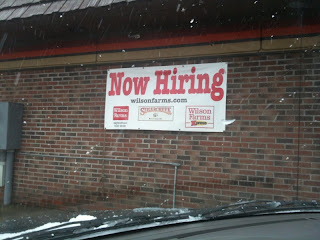 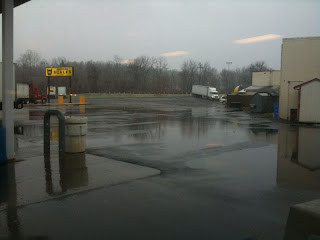 Just before exit 45, there was a multiple-car accident smack in the middle lane.

When I got to 490, it was a sheet of ice.   I exited and took backroads where everyone was moving at a rate of one mile per millennium, and by the time I got into Rochester, it looked like this: 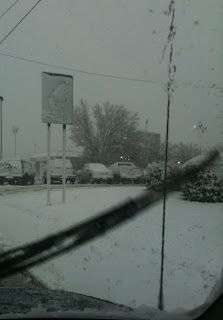 And when I got home, it was lunchtime.  Instead of catching up with Marty over his homemade Cornish game hen and lentil/barley soup, I got to eat a freezer-burned microwave meal (that I’m pretty sure Stella licked when I wasn’t looking) while re-watching the Ally McBeal episode I slept through last night.  Whatever I can stick in the microwave and old TV shows (and Stella trying to eat my food) is par for the course when it comes to lunch around here, and on most days, it’s fine by me, but in contrast to the beautiful, bright, warm plans I had, it was rather disappointing.

So, if you live somewhere with nice sunny winters and have warm fuzzy feelings about the idea of snow, I’d totally be willing to swap houses with you for the next few months to cure you of your affinity for snow once and for all.  Really, I’d be happy to help.