You are here: Home / author interviews / An Interview with Author Mandy Hubbard 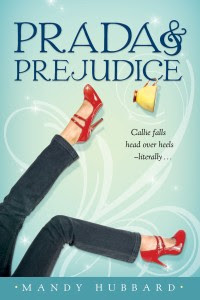 I don’t usually read Young Adult books, but I have to say that I am beyond excited about the release of PRADA & PREJUDICE tomorrow. It’s the first time in a long time that I will be at the book store looking for a book on its release date. There are two reasons for this.

1. The premise is fantastic and it sounds like such a fun book (it’s also getting great reviews!!!). “Fifteen-year-old Callie buys a pair of real Prada pumps to impress the cool crowd on a school trip to London. Goodbye, Callie the clumsy geek-girl, hello popularity! But before she knows what’s hit her, Callie wobbles, trips, conks her head… and wakes up in the year 1815!”

2. Mandy Hubbard is seriously amazing. I’ve been following her blog for about two years now. She’s been so generous in sharing her highs and lows on the road to publication. She’s stuck with it, revised fearlessly, and encouraged her readers to keep at it too.

Check out my interview with Mandy below, check out her website, and make sure to pick up a copy of P&P tomorrow. 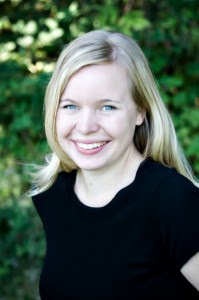 1. Your blog tagline is “A published author is an amateur who didn’t quit. Don’t quit.” Your journey in publishing has been a huge inspiration to me (and so many other writers). Can you tell us a little bit about how you got from being someone who loved to read to someone who has your very own book coming out and two more books in the works?

I think I’m some kind of weirdo, because most authors have these cute little bios about how they’ve written fiction for so long that their first stories had to be written down by their mothers, because they were only toddlers. It really never occurred to me to become a writer until I was 20 years old and found a site called Fictionpress.com. On that site, everyone is a novice, and seeing wonderful–and often flawed–stories helped me realized that everyone starts somewhere. So I jumped right in and started posting my own tall tale. It was really not very good, but Fictionpress members were supportive and I continued writing. Eventually I felt my work had improved to the point it was worth trying to get an agent. So I did. Try, that is. That work, THE BROKEN ROAD, wasn’t really agent ready. But the next one was. I signed an agent in 2006, then switched to another agent later that year. The second agent began submitting my work, but it was pretty rocky. I ended up completely rewriting PRADA & PREJUDICE from scratch, and that’s the one we sold.

2. How has your life changed since your agent sold PRADA & PREJUDICE?

I take writing more seriously. I carve out the time even when it seems like there is none left for it. And I’m not afraid to tell people I’m a writer. Some of my long-time friends were taken aback when they discovered I had a book coming out because I never even told them I wrote! Now, I don’t mind talking about writing and books to anyone who will listen.

3. Where and when do you write?

If I’m on deadline, I tote the laptop around with me and write on the train commute or during my lunch break, and then again at home. If I’m not on deadline, I tend to just write at home, after my daughter has gone to bed.

4. What is your writing process like? Do you outline, or just start writing and see where it takes you?

I’ve always been a fly-by-the-seat-of-my-pants writer, but with that has come a lot of revision. And I mean A LOT. PRADA & PREJUDICE is somewhere north of 11 drafts now. I think if I outlined I might eliminate some of that– but then again, it might not be quite as much fun, either. We’ll see how my process evolves with future books!

5. If you could go back two or three years ago, knowing what you know about the publishing process now, is there anything you’d do differently?

I’m not sure I’d change anything. I don’t think I made any monumental mistakes in the actual process, per se. I wish I could go back to 2006 and hand myself PRADA & PREJUDICE as it is today, because I think my agent could have sold it much more quickly. It took revision requests from a few editors to help shape it into an entirely different novel, and that’s the one readers will see. The original looks completely different!

I have a romance novella for Harlequin titled DRIVEN which will be out June 2010, as part of their NASCAR licensed line-up. I also have a few other YA’s in the works and hope to make some announcements about those soon!