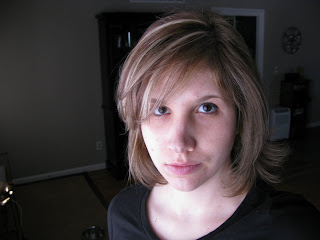 I realized that it’s been a long time since I’ve added to my 100 Things list, so here goes.

56. I got tired of being blonde. Now I’m stripey. (And I think this picture is funny, because it looks like I’m slightly annoyed at having my picture taken, but I took the picture).

57. I love Reel Big Fish. I realize that listening to Reel Big Fish annoys everyone in my general vicinity, but they have a kick ass horn section and they curse a lot, and when you’ve had a bad day, it’s very satisfying to dance around like an idiot and sing along. Sadly, I realized in 2002, the last time I saw RBF live, that since I am not a 15 year old boy, it’s probably not okay for me to go to their concerts, even if they do have a kick ass horn section and Beer is the best song ever. Also, RBF reminds me of my best friend from high school, because, while he hates RBF, he looks an awful lot like the lead singer.

58. I have a potty mouth. I’ve gotten good about observing proper time and place rules over the years, but I do love a good obscenity. I particularly enjoy combining obscene words that don’t make any sense when you put them together. I don’t, however, drop f-bombs on my blog, because I know that cursing does offend some people, and I really don’t want to make people uncomfortable. (Side note: When Lady makes reference to someone “dropping an f-bomb,” she actually says the word and then bomb, which totally cracks me up, because it negates the whole purpose of the term f-bomb. I’ve never pointed this out to her, because I think it’s adorable and I don’t want her to stop doing it, although I think she reads my blog now . . . Hi Lady!) I, personally, subscribe to the Kevin Smith theory of cursing (which I think may be a paraphrasing of a George Carlin sentiment), which is that there are “no bad words, only bad intentions,” the exception being, of course, that carabiner is an awful word.

61. Our microwave blew up on Friday, so we ordered a new one and it came yesterday, and it has convection cooking capabilities, and I was really excited about it until I saw how big the manual is.

62. I love SciFi. This completely shocks me, because I never liked Stars Trek or Wars. But last year when I had the sniffles, I binge read all of Kevin Smith’s blog (there was more on the blog before he turned it into a book), and he kept writing about Battlestar Galactica and how his wife really liked it because there were strong female characters. Then, Noelle wrote about B-star on her blog, and I believe NPW made mention of it as well. So I decided to give it a try, and I love it ever so much. Then I moved on to Dr. Who, which is absurdly awesome. I also enjoy Futurama, Torchwood, Fringe, and Heroes, and we just Netflixed Firefly. I kind of feel like I was missing out all these years. Although, I do think my enjoyment of SciFi now (and my original distaste for it) has to do with the evolution of character in the genre over the years. Starbuck has a much deeper, complex range of emotions than Han Solo does. And the relationship between The Doctor and Rose/Martha/Donna will break your heart.

64. I got excited yesterday, while reading Bookends by Jane Green, because (in addition to being a great book) there’s a Dr. Who reference in it. She refers to someone’s home as a Tardis (meaning it looks small from the outside, but is actually roomy inside).

65. I am quite comfortable with my nerdiness.