You are here: Home / books are awesome / The Guernsey Literary and Potato Peel Pie Society 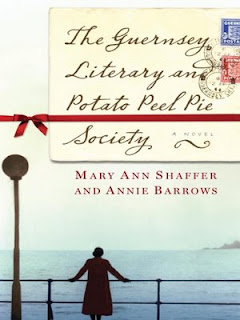 The Guernsey Literary and Potato Peel Pie Society is about a writer and her growing relationship with the inhabitants of the island of Guernsey after the German occupation, as she searches for subject matter for her next book. The story is told through a series of letters to and from her editor, the members of the Literary and Potato Peel Pie Society, and some assorted friends and relations.

When I realized the entire book was letters, I worried about the way the story would unfold. I thought this method of story telling might make for choppy reading, missing details, or information being added unnaturally to the letters, since there is no other narrative in this book. But the book is a marvel. It’s so well crafted and the story progresses easily. The characters’ voices are strong and the subject matter is fascinating. I’ve read The Diary of Anne Frank, and Night, but I’d never given much thought to the challenges facing non-soldiers outside of concentration camps in German-occupied areas of Europe during WWII.

While the subject matter is certainly heavy, the book doesn’t read that way.
This book was an absolute delight to read. I finished it a few days ago and am so sad it’s over.

Sadly, this was Mary Ann Shaffer’s first and only book. She became ill, and was unable to complete the editing process. Her niece, Annie Barrows, stepped in to complete the book. Ms. Shaffer passed away in 2008, just before The Guernsey Literary and Potato Peel Pie Society was published.