You are here: Home / STELLA / Stella! 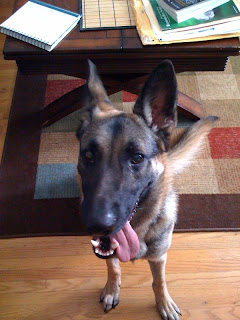 Argo the Wonderdog has a a trusty sidekick.

Two Sundays ago, the woman who trains Argo at the kennel called saying, “Please tell me you didn’t get another dog.” One of the kennel’s clients had to work too much and needed a new home for her 13 month old German Shepherd.

We hadn’t gotten another dog, so Argo and I went out to the kennel that afternoon to meet Luna. They seemed to get along well, although it was hard to tell because Argo insisted on making sure that some part of his body was touching my leg at all given times (I have mentioned that Argo and I are sickeningly codependent, right?) But when Amazing Training Lady sent me out of the room to sit in the office so Argo could stop doing his best impression of velcro, he and Luna ran around and played.

So Luna came to stay with us on a trial run. The first day was good. The second day was iffy, and things went drastically down hill from there. She could sit and stay, but that was the extent of her obedience. She didn’t answer to her name. She didn’t seem to have any sense of a “no” word or command, which meant the only way to get her to stop eating dirt out of the plant, drinking the cat’s water, or play biting my arm as if I were another dog was to actually pull her away from what she was doing. She’s not a big German Shepherd, but she’s still 60 lbs, and she has a stubborn streak.

I was exhausted. And Argo was miserable. He hated sharing my attention, he hated that Luna played with his toys and nipped at his legs. He kept trying to climb up on the arms of the couch, he wouldn’t come into a room she was in, and he sulked like crazy. I put her in her crate to give him space, but she’d be all the more hyper every time I let her out.

When I came home from the ER Sunday night after burning my hand, I sat in the car for half an hour because I couldn’t bear the idea of going in the house. She was too crazy, Argo was too sad. I didn’t want to face it. I called J and told him we couldn’t keep her.

Monday morning, I called Amazing Training Lady. We discussed options and she made me feel more confident about giving it a try a little longer. I let Stella out of her crate, and kept her out all day. She and Argo played ball. He dropped it, it bounced, she’d pick it up, and vice versa. Argo’s tail was wagging. He had the dog equivalent of a goofy grin on his face. I had no idea that it was possible for any living being to play ball for that long. After that, things started getting better.

We’ve changed her name to Stella, and she comes when she’s called already. She has a no command, she’s learning to lie down, and she’s learned that I am not a dog and don’t think being bitten is fun even if it’s only in play. She still eats dirt out of the plant, and tries to drink the cat’s water, but something has shifted in her relationship with Argo. He’s so happy around her, and I swear she looks at him like she’s in awe. She has a crush on him, and it’s impossible not to fall in love with a pup who totally recognizes the greatness that is Argo.

This morning, I took them out to play Frisbee. Stella totally doesn’t get what’s going on. She just likes to hold the other Frisbee in her mouth and run next to Argo while he catches the one I’m throwing.

It’s amazing to see Argo so happy, but a little part of me is sad that I have to share him. A little part of me feels like doing my best velcro impression. But, I’m not losing a dog, I’m gaining another one. When I took a shower this morning, Stella camped out on the bathmat, nervously waiting for me to get out. And when I walk around the house doing various chores, I now have a dog on either side following me. It’s like going from having a bodyguard to having an entourage.

It’s a lot like writing a shitty first draft after spending time editing and tweaking something that’s almost perfect. We had to work with Argo when first got him, but now that’s he’s so perfectly wedged into our life, it’s hard to remember that there was ever hard work involved. But, after going to doggie hell and back with Stella, I really think she’s worth the work and the hair pulling and the never ending stream of plant dirt on the carpet. And I’m really excited to see where everything will go from here. So I think we’re going to keep her.