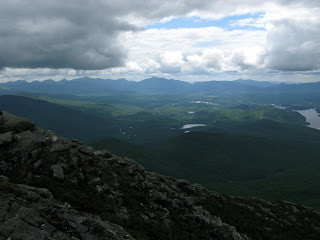 Last week J and I headed to Lake Placid. @HighPeaksResort was having an amazing special that resulted in us staying in the most gorgeous hotel I’ve ever been to for 49 bucks a night. It was heaven.

What was not so heaven-y was our trip up Whiteface Mountain. J and I have decided to climb all 46 of the High Peaks in the Adirondacks. Prior to this trip, we’d done five, and despite various bumps and bruises (and a huge hole torn in the back of my hiking pants and my upper thigh), the view from the top has been worth it. And there’s no way we would have seen those sights if we hadn’t done the hike. 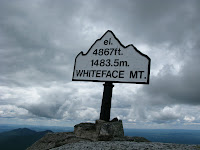 The thing about Whiteface is that the trail isn’t very nice. The only people who bother to hike up it are people who aspire to be 46ers, because there’s a drivable road going up to the top. There’s a snack bar, and an elevator from a lower parking lot to the summit marker. Nothing like climbing 4,867 ft to eat crappy nachos at the summit in a snack bar full of people who drove up the mountain in their air conditioned cars and couldn’t seem to figure out why J an I were so dirty and smelly.

Also, the elevator creeped me out big time. I have issues with caves and confined spaces. I get agita watching documentaries about cave diving. There was an elevator going through the center of the top of the mountain. Seriously. We didn’t go in it, but it’s very presence bugged me. We peeked in the drippy, dark tunnel leading up to the elevator, and my legs stopped working for a minute. My head knew we weren’t going in there, but my feet hadn’t gotten the message yet, and they were totally protesting.

J laughed and said, “Trust me, no one wants to get in that elevator with you.” I believe this was a commentary on 1. the amazing stench I’d worked up getting to the summit and 2. the inevitable panic attack I would have had if we’d gotten in the elevator. I pretended to be offended, but I have to admit he was right on both counts.

On the way down, we hit the adjoining trail for Esther, which is 4,239 ft high, and also one of the 46. Esther is named after a 15 year old girl who made the first recorded climb to the summit of the mountain in 1839. Unfortunately, she thought she was climbing Whiteface. I love her. 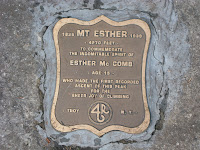 The view from the top was lovely and it was nice to get to a peak that did not have a gift shop. But, the trail on Esther was wet, muddy, and rocky, and by the time we started the return trip, my feet were a pruney, bruised mess. So J got to listen to me curse Whiteface and its crappy summit nachos all the way down the mountain. Because he is an amazing man he promptly called the front desk when we got back and scheduled a massage for me at the resort spa.

We spent 4 nights in Lake Placid. We climbed Baxter, which is not one of the 46, and spent an afternoon kayaking on Mirror Lake. We worked a little, read a little, watched crappy TV since we don’t have cable at home (seriously, what happened to television?), ate some amazing meals (including the best sandwich ever, on gluten-free bread), and just got to be together. We get so caught up in the every day hassles, and we don’t get away often. It was so nice to have nothing to do, and have more space for moments of looking at J and being overwhelmed by thoughts of ‘Wow, I love that guy,’ instead of ‘Why can’t you put your cereal bowl in the dishwasher?’ (not that I don’t have ‘Wow, I love that guy’ moments at home. . . you know what I’m saying).

I have to admit that I’m a little sad to be back in the real world, even though my version of the real world includes my amazing husband, my dream job, two adorable dogs who are still tired from their time at the kennel, and a whole bunch of other great things. If I could live in a hotel, I totally would. And if that hotel were in Lake Placid, I don’t think you’d hear me complaining (unless I had to climb Whiteface again). Effing Whiteface. 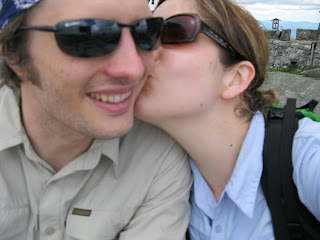