You are here: Home / Argo the wonder dog / My Trusty Dog Argo I’ve been mostly absent from the internet for the past few weeks. It’s hard to dive back in without an explanation, and oh, this is so hard for me to explain.

Argo was diagnosed with terminal cancer a few weeks ago. We rushed him out to a specialist in Buffalo and spent days getting opinions and second opinions. J, Stella and I crowded into Argo’s inpatient kennel for visiting hours, holding his paw, rubbing his belly, feeding him every favorite food we could procure on our binge trips to Wegmans. In the end, there’s nothing we can do to fix him.

We didn’t think we’d be able to take him home again, and when we did, we thought it was just for one last car ride, maybe a night at home cuddling like crazy. But in the morning he was happy and perky and wagging his tail.

He’s not ready to go yet. We’ve had a few rough nights, but we’ve had some brilliant, beautiful days. It’s been a couple weeks of almost normal time, and we’ve clung to every moment.

We don’t know when, but it won’t be long. And of course, it will never be enough.

He can’t jump up on the bed anymore so we’re camping out on the floor. We stop everything for belly rubs. We roast a lot of turkey because it’s his favorite, and I know I will desperately miss how he grumbles protectively at every outside noise when there’s turkey in the oven. We read too much into every sigh, wake up in a panic at the slightest hiccup. The sound of dog snores is bliss.

Argo is my crash course in unconditional love. He’s made it safer for me to love and trust in love. I’ve reached so much further because no matter where I went or what I did — if I failed or succeeded or fell somewhere in between — Argo would greet me at the door and love me just the same. I’m a better person because we’ve belonged to each other. I just wish we had more time. 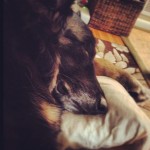 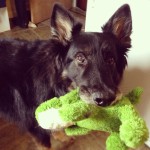 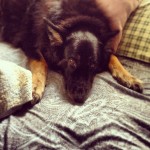