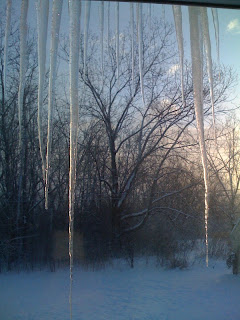 In other words, funky, funky, which best describes the mood I was in for the past couple of weeks. (If you have no idea what I’m talking about, you may be too young to read my blog, and you should probably watch this).

God, I miss the 90’s sometimes – that little teeny tiny moment in time when it was cool to be an Xer. Because honestly, sometimes, I feel like we’re just gasping for air, smooshed between the Boomers and the Y’s. But that’s probably another rant for another day.

Anyway, I was stuck in a really big funk and that’s why I wasn’t blogging. Noelle wrote about having a new year breakdown and crying about everything crappy that happened in 2008, and I had one of my own. While I was sobbing uncontrollably (in the backyard), I was actually thinking, this happened to Noelle too, maybe it’s just a 2009 rite of passage or something.

What spurred it? Well, of course it was dog related.

Since Thanksgiving, I have worked my ass off with Stella. She wouldn’t pee while she was on her leash, so we had to let her off leash in the backyard to go, so she wouldn’t end up exploding, or peeing on our rug (which happened 3 times). But we don’t have a fenced in yard, so getting her to come back in was a challenge. Add to that her inexplicable fear of doorways, and you have a big problem.

After working with her to the point where I was beginning to feel like my only purpose in life was to be a dog babysitter, I finally got her to come inside easily when I called her. But then, last weekend, when it was all of 10 degrees out, Stella ran off after some birds and discovered that Mrs. Gnome leaves chunks of meat in her backyard.

I spent an hour (in my slippers) running around trying to get the dog to 1. drop the meat, and 2. go back in the motherflipping house. When the snow pulled my slipper off mid-run, and I ended up barefoot in snow up to my shin, the stream of profanity that left my mouth would have made George Carlin proud. J came out to help me, and we got Stella back in the house. One problem. She still hadn’t peed.

I found Argo’s super long training leash and used that to bring Stella out in the yard again, hoping that the 20 or so feet of personal space she could get on that leash would be enough to get her to go, but it still took a good 30 minutes before she peed. And somewhere in those last 30 minutes in the back yard, I lost it. I started openly weeping and whimpering things like “Why can’t you pee like a normal dog?” and “Who puts meat in the their back yard?” But it wasn’t all about my urinarily handicapped dog and the freaking meat chunks. I cried because my goal in life is not to be a dog babysitter. I cried because I hate our house and our neighborhood and our not-so-delightfully wacky neighbors. I cried because I miss my best friend, and I was tired and it was cold and I hadn’t seen sun for days, and I didn’t accomplished everything I set out to in 2008. I cried because no matter how much I accomplish, what I don’t accomplish always seems to matter more.

But, let’s get back to the important part of this story. Who the frack puts meat out in their back yard? At first, I thought maybe Mrs. Gnome was trying to poison Stella, because Stella may or may not have peed in The Crap Garden (ha! That’s funny) earlier in the week. When I finally got Stella to drop the meat, I ran into the house and dropped the meat in a plastic bag to store in the freezer, ranting to J that if Stella got sick, I was going to tell the authorities it was a homicide attempt and they could test the meat and Mrs. Gnome would totally do hard time in a bad place with other dog killers. After running around for an hour in slippers in 10 degree weather, I’d given up on being rational. Also, in my near hypothermic-rage, I may or may not have threatened to urinate in the gnome’s garden. I am thankful that my husband realizes I am all bark and no bite.

Later, I remembered Mrs. Gnome telling me that she feeds the fox that lives behind our houses to encourage him to stick around and eat the bunnies that eat her garden.

Um. . . wait a minute. Bunnies don’t hibernate. I see 2 or 3 of them a day. Our yard is littered with bunny tracks and little brown marbles, and I would like to go so far as to propose that we have so many bunnies in our yard, because Mr. Fox has an endless supply of meat waiting for him in The Crap Garden. I mean, if I were a fox and I had the choice between running around in the snow after bunnies and chowing down on meat that’s already cut up in neat little cubes waiting for me under the bird feeders, I know what I’d choose. I spent an hour running around in the snow after Stella, and, it wasn’t fun. Although, admittedly, I had no desire to eat her once I caught her, so perhaps the chase was missing some essential element.

So now, despite my two months of work with Stella to get her to come when she’s called, I am forced to take her out on her long leash and wait and wait and wait for her to pee (last night, when it was 2 degrees, it was especially fun), because Mrs. Gnome hasn’t seen enough episodes of nature to know that a fox with a belly full of meat probably isn’t going to chase a rabbit.

But I did get a good long cry out of the deal, and that, like a fever breaking, was the beginning of the end of the funk.

We really need to move. Also, if we ever do, I am going to have “Good Fences Make Good Neighbors” tattooed on the back of my hand before we start househunting, because I believe no truer words were ever spoken.