You are here: Home / Argo the wonder dog / I miss all the excitement. 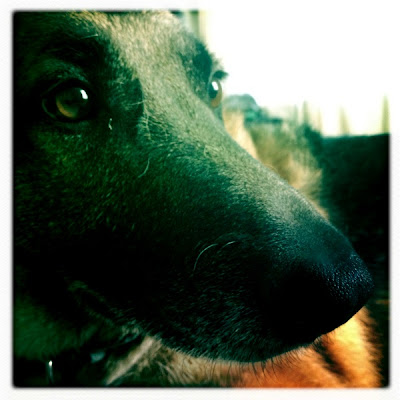 Stella hates the stove.  When it’s in use, she lies on the kitchen floor watching us carefully like she’s expecting the oven door to open up and swallow us whole.  She won’t eat, she won’t drink, she won’t let the person cooking out of her sight.  And even when the stove is not in use, if she has to walk past it, sometimes she’ll do the same quick little scurry run we all did as kids when we didn’t want the monsters under our bed to grab our ankles.

She’s never been hurt by our stove, there’s never been an incident in the time we’ve had her, but on the list of Stella’s nemeses, the stove is just below cardboard boxes, and above that weird spot on the floor that gets sunny sometimes if the blinds are open just so.  It’s a fabulous excuse to not cook.
Yesterday, I had to run errands.  When I came home Stella was wound up, jumping around, doing her grumbly howl thing at me like she had stories to tell.
J said he’d put some tater tots in the oven and while he was waiting for them to cook, he got on the treadmill.  While he was jogging, the oven smoked just enough to make the smoke detector beep once (the smoke detector is a little too close to the stove).  It was just a tiny little blip and then it stopped.
Stella tore into the room, jumped on the treadmill with J, and tried to walk between his legs, like he was base and that automatically made her safe.  Of course then Argo was all “Hey, guys! Why is everyone on the treadmill without me?” and my family turned into a circus act.
I missed the whole thing.
But I did get licorice jellybeans, so there’s that.