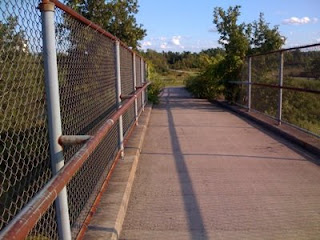 Picture from my bike trip.

I did a guest post over at Extra Ordinary today about my love of cheesy music, and it got me thinking of another writing habit I employ.

I make playlists for my main characters. Getting my butt in the chair and getting focused is another really important part of writing (obviously). Playing songs that my character would like or listen to, or songs that in some way trigger something for me about that character is a vital step in my the process. It gets me thinking in their head instead of my own, and makes it easier for me to stay true to my character, so I don’t feel like I’m manipulating their actions, just following them.

I’m not saying I’m channeling anything. No imaginary people speak to me, there’s no voice from the heavens, no deus ex machina action providing me with divine inspiration to solve all my writing problems. It’s more along the lines of what Anne LaMott says in Bird By Bird about listening to your characters so they’ll tell you how to write them. Listening to a character specific playlist helps me listen to my character.

One of my main characters was really into Boston, so I spent a lot of time listening to Boston, Journey, and bands of that ilk (from my post at Extra Ordinary, I’m sure you can tell that was horribly painful for me). It helped me get her on a different level.

When I started writing Bathtub Mary, I decided early on that the story needed to take place during the summer of 1982, and I started listening to a lot of music from that year. Rio by Duran Duran came out in May of ’82 and was a great fit for Margie’s story. It was a song that would have sounded so different and new to her, coming from a household where her mom worshipped Stevie Nicks. I also loved being able to play with the image of someone walking on water (“Oh Rio Rio, dance across the Rio Grande”), and the issues of religion in the story. I could have written the story without the music, but it would have been missing something.

My current project actually started with music. I was listening to a lot of Dar Williams, and started thinking about how hard it would be to actually be a folk singer – the travel, the dive bars and coffee shops, the people who want a piece of you. Then I heard This is the Sea by The Waterboys, and it really struck me. The first line “These things you keep, you better throw them away,” gave me a rush of ideas. I started a story about a girl named River (being very literal to the song lyrics, “That was the river, this is the sea”) who was a folk singer, and left something behind everywhere she went. The story was overly symbollic and heavyhanded and exactly the kind of dreck a first draft should be, but when I got to the end of it, I had a character who, with a name change, and a different focus, is one I’ve decided to keep, and not throw away (sorry, I couldn’t resist).

Her song list is heavy on the folk – Jeffery Foucault, Dar Williams, Kris Delmhorst, Peter Mulvey, Josh Ritter, Ryan Adams (Call Me On Your Way Back Home feels like it was written just for my main character at this stage of the game) – but also heavy on The Cure, Counting Crows, REM, and The Lemonheads, because that music taps my teen angst and also puts me in the story’s mid-90’s time period.

I just downloaded a recording of Toad the Wet Sprocket playing live in Arlington yesterday, and I’ve got 20 songs worth of writing inspiration right there. Time to put my butt in my writing chair.