You are here: Home / books are awesome / Guest Post: How I Became a Daughter of the Witching Hill by Mary Sharratt 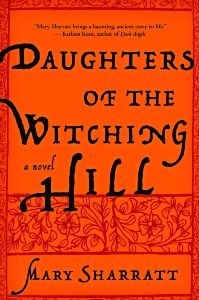 In bleak midwinter 2002, I moved to rural Lancashire, in northern England, an incongruous place for an American expat. The first months were so oppressively dark, I felt I was trapped inside some claustrophobic gothic novel. But then came spring in a tide of bluebells and hawthorn. The wild Pennine landscape cast its spell on me.
I live at the foot of Pendle Hill, famous throughout the world as the place where George Fox received his vision that moved him to found the Quaker religion in 1652. But Pendle is also steeped in its legends of the Lancashire Witches.
In 1612, seven women and two men from Pendle Forest were hanged for witchcraft. The most notorious of the accused, Bess Southerns, aka Old Demdike, cheated the hangman by dying in prison. This is how Thomas Potts describes her in The Wonderfull Discoverie of Witches in the Countie of Lancaster:
She was a very old woman, about the age of Foure-score yeares, and had
been a Witch for fiftie yeares. Shee dwelt in the Forrest of Pendle, a vast
place, fitte for her profession: What shee committed in her time, no man
knowes. . . . Shee was a generall agent for the Devill in all these partes: no
man escaped her, or her Furies.

Once I read this, I fell in love. I had to write a book about this amazing woman. Bess became the guiding voice and power behind my new novel, Daughters of the Witching Hill.


Reading the trial transcripts against the grain, I was astounded how her strength of character blazed forth in the document written to vilify her. She freely admitted to being a healer and a cunning woman, and she instructed her daughter and granddaughter in the ways of magic. Her neighbors called on her to cure their children and their cattle. What fascinated me was not that Bess was arrested on witchcraft charges but that the authorities turned on her only near the end of her long, productive career. She practiced her craft for decades before anybody dared to interfere with her.


Bess’s life unfolded almost literally in my backyard. To do justice to her story, I had to go out onto the land—walk in her footsteps. Using the Ordinance Survey Map, I located the site of Malkin Tower, once her home. Now only the foundations remain. I board my beautiful Welsh mare at a stable near Read Hall, once home to Roger Nowell, the witchfinder and prosecuting magistrate responsible for sending Bess and the other Pendle Witches to their deaths. Every weekend, I walked or rode my mare down the tracks of Pendle Forest. Quietening myself, I learned to listen, to allow Bess’s voice to well up from the land. Her passion, her tale enveloped me.


History is a fluid thing that continually shapes the present. As a writer, I am obsessed with how the true stories of our ancestors haunt the land. Long after their demise, Bess and her fellow witches endure. This is their home, their seat of power, and they shall never be banished. By delving into their story, I have become an adopted daughter of their living landscape, one of many tellers who spin their unending tale.
Mary Sharratt’s critically acclaimed novel Daughters of the Witching Hill is now available in paperback by Mariner. To learn more about Mary and the true history of the Pendle Witches, visit her online: www.marysharratt.com .