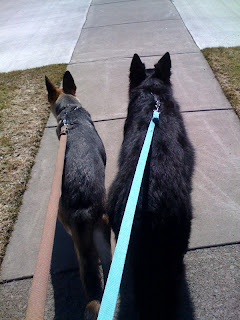 Well, we got three quotes on a fence, the highest being twice the lowest. We had the same thing happen when we needed a new roof. This is why at least three quotes are a necessity when it comes to hiring someone to do home repairs. I am shocked that the cost can vary so much, especially in this case, when we are talking about the exact same type of fencing.

Fortunately, the lowest price was from the person I like the best. He didn’t try to talk me into fudging our property lines to put the fence on the drainage easement that’s on one side of our property like the other two did.

Several of you mentioned putting up your own fencing. I admire you. I am sure it would save us a good chunk of change . . . on fencing. But, I have learned that most DIY projects around this house usually result in increased medical costs. Most significantly, the bathtub caulking/plumbing incident that resulted in a herniated disc and a lost year of my life. I am in far better shape now than I was then, (and don’t spend my days teetering around on high heels and sitting in a crappy office chair anymore), but with all the work I have ahead of me, I’m not taking any chances right now. I’m accident prone, and Jeremy has been working so much that he just doesn’t have the time right now, so we’re going to leave it to people who know what they are doing and have the proper tools.

Last Thursday, I went down to the town hall to get a permit. Hopefully, that will come through this week, then I’ll send in my deposit. Weather permitting, we could have a fence up in the next three weeks. Oh, that would be lovely.

Stella has been doing okay with going out leash-free to do her business (as long as Argo is with her) but she won’t go if Mr. or Mrs. Gnome are outside. If she sees either of them, she just stands there barking, with the grey patch of fur on her back puffed up at attention. So, in order to get her to pee outside instead of inside, I have to keep an eye out and take her when Mrs. Gnome goes in her house. As the weather gets warmer, the window of pee time will just get smaller and smaller, because Mrs. Gnome spends all summer rearranging The Crap Garden and raking leaves out of the woods. Hopefully, the fence will keep Stella from noticing her presence. Hopefully, Stella won’t just turn around and develop a fear of the fence. Since I’ve observed Stella’s sudden fearfulness of a random spot on the kitchen floor, or a cardboard box, or a gust of wind, I know fence-fear is well within the realm of possibility.

Stella is such a colossal pain in the ass sometimes, but my love and devotion for that little dog is limitless. I don’t know if I see myself in her – the weird fears, the insecurities, the optimism she seems to employ when starting each day – or if I just have a need to root for the underdog (pardon the pun). Either way, I’m really glad she found us and vice versa. Now, I need to figure out how to get her to stop trying to eat the coffee table.