You are here: Home / dogs / Bass Ackwards: A Stella Story 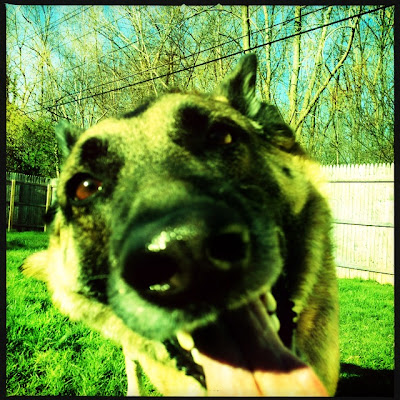 Stella has conquered a long list of fears and is generally a happy pup now, but she’s still terrified of a spot on the kitchen floor.

She’s been afraid of the scary spot since she came to live with us.  There’s not much to distinguish the scary spot from any other span of floorspace.  At certain times of day there may be a sun patch there.  It’s near the stove and she hates the stove, but she finds this spot terrifying even when no one is cooking anything.

Leaving the kitchen via the scary spot (which is the only way to leave the kitchen) turns Stella into a Bambi on ice impersonator.  Her legs splay out.  Her feet scramble like a cartoon character.  Sometimes our poor girl gets “trapped” in the kitchen when her fear gets too great.  I’ve woken up a few times to a sad little whimper from down the hall when Stella ventured into the kitchen for a drink from her water bowl and simply could not escape until I ran in to grab hold of her collar and lead her across the scary spot so we could go back to bed.

There’s nothing there.  Nothing.  She’s never been hurt there, and the rest of the floor doesn’t scare her.  Also, apparently it’s only scary to walk over the scary spot when she’s leaving the kitchen, not when she’s entering the kitchen. 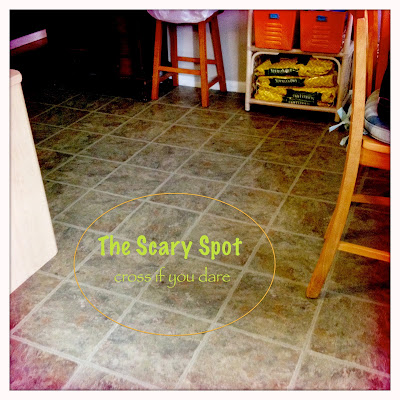 Last weekend, J noticed that the frantic cartoon scrambling had stopped.  Now, when Stella gets to the scary spot, she turns around and backs out of the kitchen.  J posited that because Stella doesn’t find it scary to walk into the kitchen, she may have associated her fear with the direction she was facing when she crossed the spot.  Backing through to leave the kitchen isn’t scary, because entering the kitchen isn’t scary.

Sure enough, over the past week I’ve watched Stella walk right to the imaginary scary spot line.  The shaky Bambi legs would start, but then she’d pause and turn around to back through the spot without further incident.

The thought process and strategy involved in this new kitchen exit method is seriously impressive…but there’s still absolutely nothing there.
Maybe it’s the dog version of holding one’s breath while driving past a cemetery.