You are here: Home / Argo the wonder dog / A hair follicle trauma or an insect bite 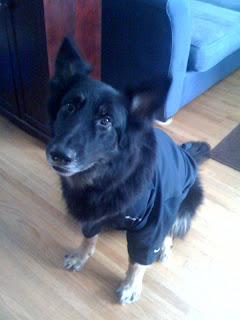 Argo does not have cancer. The bump was benign and the biopsy report stated that it was a hair follicle trauma or an insect bite.

How they aren’t able to tell the difference between the two, but still know that it was one or the other and not one of the gazillion other things that could result in a fairly large, tumor-y looking bump is beyond me, but I am not going to waste time splitting hairs over that. It’s not cancer, and I am so freaking relieved.

It was around this time last year that Argo did have cancer, and we made several trips to the amazing veterinary school/hospital two hours away for diagnosis/surgery/follow-up. I just kept thinking, here we go again, worrying that since the bump was at his side, there wouldn’t be enough spare tissue to remove to get wide margins around the tumor this time, so the next step would be radiation, but radiation is way more expensive than we could afford (but how do you put a price tag on your dog’s life?) and even if we could afford it, the tissue gets so weak from the treatment that it’s important to keep it from trauma and the little dog likes to jump on Argo all the time and how would we stop that and would we have to give up the little dog and oh my god my brain can go a mile a minute when I let it.

I’d like to thank the jerkwad at the microchip company for feeding my overactive brain by telling me last year that my dog would probably get cancer and die young because he was just destined to and the microchip had nothing to do with the cancer even though the chip was at the base of the tumor and the oncology specialists couldn’t figure why a dog Argo’s age would get that kind of tumor in that location until they found the microchip. Because, for the past two weeks, I have heard his smug voice in my head saying, “I told you so,” every time I checked Argo’s stitches.

Well, Mr. Microchip Man, I TOLD YOU SO. I am not a scientist, or an oncologist, or a doctor, but people who were told me the chip/tumor connection seemed highly suspicious, and while I will continue to have odd bumps biopsied, I also will continue to believe that my dog’s microchip caused his cancer, and it does not mean that my dog is destined to die young. It means that the soulless butt-wipes at the microchip company play on your heartstrings and fears about losing your pet so they can sell you a product that may actually be the cause of your pet loss.

Of course, this is all my opinion, because causation in cancer cases is very very hard to prove. That’s my disclaimer so the microchip company doesn’t get on my case about it.

My other disclaimer is that I honestly believe that if your dog is over 40 lbs and has enough fur so he doesn’t get cold in the winter, there is no reason or excuse for dressing him. But given the choice between

I will chose the t-shirt. And I will take pictures of it, because it’s pretty damn funny.

And now, if you’ll excuse me, I’m going to go take care of all the things I ignored for the past two weeks while I waited for the results. After, of course, I play bad music at deafening decibels and jump around the room with my dogs for a few minutes.