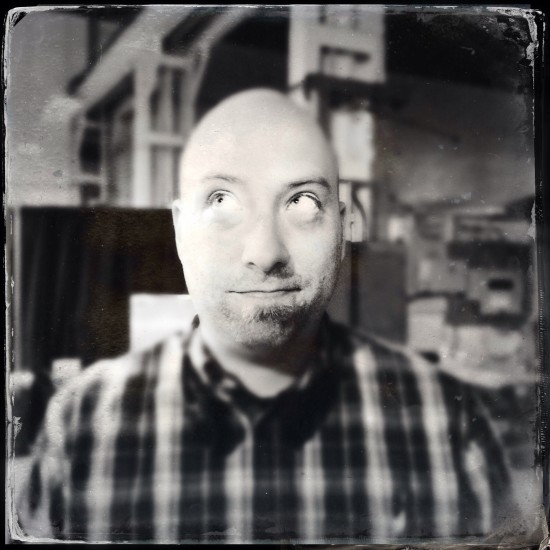 Television shows.  (Ugh, that always sounds odd to me.  Because truthfully — I’m but a cog in the much larger, hulking machine of a television show.  It’s not as if a show bursts forth, fully formed from my forehead.  I’m not Zeus.  There are easily a few hundred other people that take whatever mediocre ideas we come up with and adjust/adapt/improve until they are so SO so much better.  The beauty of collaboration!  But the process usually starts with someone like me putting ink on paper.  And while you probably didn’t need most of this parenthetical babble, it fills up a good amount of space and we can always trim it down in post. [That’s a television joke! Hilarious!]  Which is all to say) I’m a writer.

Because the Self-Doubt tells me I can’t.  That I shouldn’t even try.  So f*ck him.
Looking objectively at my time on this planet, it could be said that I’ve been drawn to creation in some form or another.  Hand-drawn comic books in 5th grade.  Bad Jim Morrison-esque poetry in junior high.  Evenings of live British humor in high school.  Somewhere around college (go Bombers!) the Self-Doubt started hanging out more often.  “Dude, they’re just gonna say no.”  “Oooh, man.  It’ll end up terrible, don’t even bother.”  Wasn’t until years later that I got past that — after being cajoled by my boss (a TV writer/producer) to just take his offer and write a goddamn episode of his television show for chrissakes.  “You’re a writer”, he said.  I didn’t believe him, but since I already turned down his offer once before (!) I figured I might as well give it a shot, fail, and move onto something else.  Didn’t quite work out that way.
That’s not to say the Self-Doubt has gone away.  Certain days he’s more of a jackwagon than others.  But when I put words down on a page or screen — any words — it helps keep him quiet.. er.  The clack of keys muffling the doubt and all that.

Comics, a more-than-healthy amount of TV, some books, handful of films, music MUSIC music MUSIC, vid-e-o games, a couple sports, lots of web content (although not as much as I used to), photography, beeeeeeeeeeeeeeer, good food/bad food (I may or may not be gorging myself on Airheads as I type this), medication, nostalgia, memories, clichés.  I also enjoy sunsets, cuddling, long walks on the beach and oh cripes I am pretty sure that this last part was intended for another site but ah well let’s just go with it and maybe no one will notice

You can check out both seasons of my show Copper on Netflix.